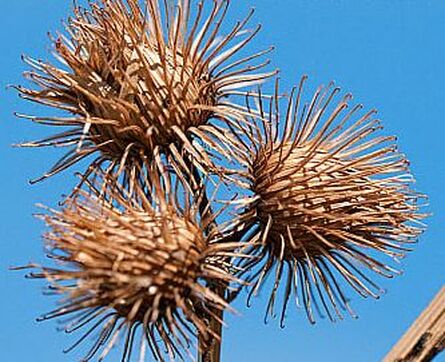 A Vet in Sevenoaks Kent was met with an unusual case involving one of her own dogs.  After going out for a walk 2-year-old Finley, a male border collie, chewed and ate green unripe burdock burrs that had become caught in his tail.  His owner was not aware of these burrs until Finley vomited them up and was drooling, being unaware of the condition “burr tongue” she administered an anti-sickness medication and continued to monitor him.

The following morning Finley was still drooling so further investigation was required.  Under anaesthesia a very thorough examination of his mouth revealed multiple pale-yellow bristles in his upper lip.  It took two hours to carefully remove all of the bristles using tweezers and magnification, the bristles were also found on his tongue and other areas of his gums.  Once recovered from his anaesthetic the drooling stopped, he was prescribed antibiotics, anti-inflammatory/pain killer and gut protectants for 7 days.  Finley required hand feeding for a few days afterwards as his mouth was still very sore but has made a full recovery.

This is quite a common condition with the plant appearing in the UK between July and September wit the thistle heads appearing August to late October. It is important for owners of long-haired breeds to be aware of the risk of “burr tongue” and check the dogs coats after being in an area where the plants may be present.
​
Reported in Veterinary Times dated 15th October 2018 by David Woodmansey.