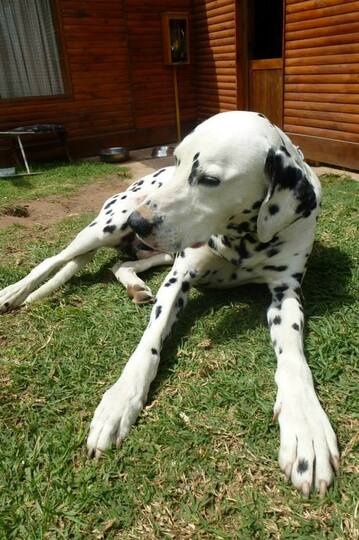 Gastric Dilation Volvulus:  One of the few true emergencies in veterinary practice.

• Gastric: Of the stomach.
• Dilation: Act of or being made to become larger, more open or wider.
• Volvulus: Obstruction caused by twisting of the stomach or intestine.

In simple terms the stomach twists, the gas and/or liquid within the stomach can’t empty and starts to ferment which increases the gastric pressure causing the stomach to expand, like a balloon.  Without veterinary intervention the stomach will eventually burst, or the dog will die due to other complications caused by the condition.

Also known as Bloat or Torsion:

 Blood picks up oxygen from the lungs and carries it to every cell in the body.
 Once the oxygen has been dropped off all the waste products are collected and the blood carries these back to the liver, kidneys and lungs.
 The kidneys and liver filter all the waste products making them safe or directing them to the bladder where they can be passed out of the body.
 The lungs collect all the waste gases such as Carbon Dioxide and these are expelled out during a normal breath.
Without the heart pumping effectively and adequate blood flow the cells do not receive oxygen and start to die.  The waste products that are safely stored in the cells until they can be collected by the blood are released into the body and will lead to sepsis.  It is important to remember that the cells are in every part of our body meaning the cells in the heart, lungs, liver, kidneys and brain will also be affected.
Every organ is affected during a GDV, the stomach is at an increased size and in the wrong place causing it to push and restrict organs preventing blood flow causing low blood pressure and cell death. The lungs are unable to expand effectively restricting breathing and the heart is at serious risk of developing an arrhythmia (irregular heartbeat).

• Agitation/pacing.
• Retching, trying to vomit and bringing up white froth or nothing at all.
• Drooling.
• Panting.
• Pale gums.
• Bloated appearance to the stomach.
• Collapse.
If you see any of the above signs get to your vet as soon as possible. The condition usually occurs in deep chested dogs and breeds most likely to be affected are:

• Intravenous fluid Therapy to correct low blood pressure (hypovolaemia).
• Pain Relief.
• Oxygen Therapy.
• Careful monitoring of the heart rhythm using ECG.
• Blood samples to check electrolyte balance and blood gases.
• Decompression of the stomach.  How this is done depends on each individual case.
• Surgery to untwist the stomach and this is usually stitched back into place to prevent future torsion (gastropexy).
• It is common that the spleen has twisted and become damaged, this may need to be removed (splenectomy).
• If areas of the stomach wall have died these may need to be removed.
• During surgery the veterinary surgeon can see the extent of tissue death due to the GDV, sometimes too much has occurred to sustain life and euthanasia is the best option.

No-one really knows for sure what causes dogs to develop GDV but there are some risk factors that have been identified.

• Older Dogs
• Deep chested Breeds.
• Feeding a large meal then going for a walk.
• Feeding once daily rather than several small meals during the day.
• Too much water before going for a long walk.
• Eating foods that expand in the stomach, i.e. kibble.
• Dogs suffering from Irritable Bowel Disease.
• Nervous or unhappy dogs may be at a higher risk.
• Eating a lot of food in one meal i.e. a dog that has raided the bin.

The only way to prevent a torsion is for your dog to have a gastropexy performed as an elective procedure.  This may be able to be performed during a bitch spay but you must speak to your vet and weigh up all the risk factors.  A gastropexy will not prevent the stomach bloating, just prevent it from twisting.

 Feed small meals throughout the day.
 Do not exercise your dog after a meal.
 Soak kibble prior to your dog eating it and measure the amount fed to ensure you are not over feeding.
 Be aware of the symptoms and get your dog to the vet quickly if any of them are seen.
​
You can do all of the above and your dog may still develop bloat or GDV.