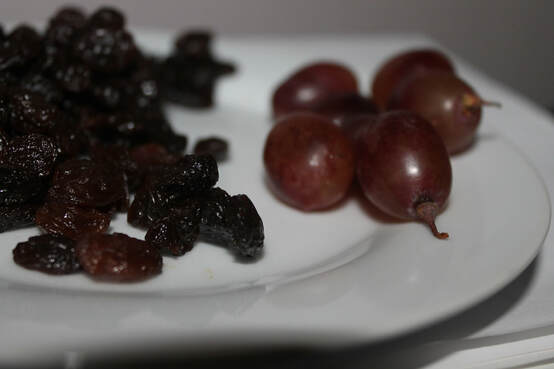 Jenson, an 8 year old West Highland White Terrier made the most of the 5 minutes being alone in the room with the chocolate raisins.  He helped himself and luckily his owners were very aware of the risks of both chocolate and raisin poisoning in dogs so he spent the night at the out of hours veterinary surgery and the following day at his own clinic.  Jenson, a lovable and cheeky chap is proof that dogs do not learn from their mistakes as he had eaten a whole load of celebration chocolates 2 years earlier.

Jenson's treatment involved being made to be sick to bring up the raisins in his stomach, being placed on intravenous fluids to support his kidneys and being given liquid charcoal (hence his charcoal chops in the photograph) to bind any toxins within his system that may have already been absorbed.  He had blood taken to check his kidney function and this will most likely be re-checked in a few days/weeks to see if the kidneys have been affected.  Kidney damage is not seen immediately after raisin/grape/sultana ingestion but develops over time.

I am sure there are some of you who have previously fed your dogs grapes etc with no problems at all and can’t understand where this idea has come from. The issue is this, in some dogs just 1 grape could kill them while others could eat a whole bunch without being affected. The only way to know if your dog is susceptible is to feed a grape and see if it develops fatal kidney failure. There is no other way of knowing, which is why any grape, raisin, currant, sultana ingestion must be taken very seriously.
​
If your dog has...or even if you just think it has, eaten a grape please contact your veterinary surgery immediately. If caught soon enough after it has been eaten there is a very high chance of successful treatment with no long-term effects. It is not worth the risk, I have seen a one year-old dog die after eating grapes and it is not something I wish to repeat.