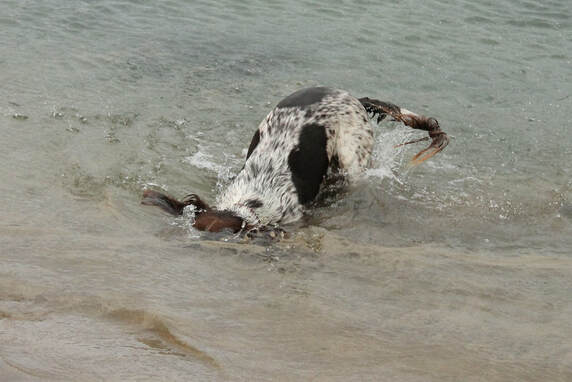 Dogs love jumping into water but sometimes it can go horribly wrong.

NEVER PUT YOURSELF IN DANGER TO RESCUE AN ANIMAL.

Drown: To Die through submersion in and inhalation of water (Oxford English dictionary).
Near Drowning: Survival after suffocation caused by submersion in water or another fluid (Medical Dictionary the freedictionary.com).
The body reacts very differently in near drownings depending on the type of water involved.
• Salt water: The water inhaled into the lungs will stay there and will start to draw fluid from the circulation into the lungs.
• Fresh water: The water is quickly absorbed into the circulation causing cells to swell and some may burst.  By the time the animal is out of the water the lungs will have no inhaled water in them.

The Lungs need to be emptied of water if incident has occurred in salt water.
• If you can lift the animal hold it upside down by the hind limbs for 15-20 seconds and give 3-4 downward shakes. The water should run out of the mouth allowing the animal to breath by itself.
• If you cant lift the animal Stand behind the dog with the dog facing away from you and the hind legs against your legs. Lift your dogs hind legs like a wheelbarrow and tilt forwards so the head is lower than the abdomen.
• Clear mouth and airway of water or vomit and ensure the airway does not become blocked.
• If you can‘t lift the animal place items, such as clothing, underneath its back end and abdomen allowing the head to be the lowest point.  Ensure the chest, neck and head are straight.
•
1. Start mouth to nose respiration if the animal is not breathing.  The lungs are likely to have collapsed and need filling with air.
2. Start chest compression's if no heartbeat.
3. Try to avoid hypothermia by drying the animal off as much as possible, cover with a blanket and move     to  warm environment.  It is vital that dogs with an undercoat are dried effectively.

PHONE YOUR VET AND ARRANGE TO ATTEND THE SURGERY IMMEDIATELY IN THE CASE OF ANY NEAR DROWNING.

Secondary drowning can occur up to 2 weeks following the near drowning : Aspiration Pneumonia.  A foreign substance has been inhaled into the lungs causing an infection leading to fluid accumulation in the lungs (pulmonary oedema).

Keep the animal warm with the head and neck extended and pull the tongue forward. Ideally place the animal with the head lower than the chest whilst in transport to the veterinary surgery so any further water can drain out of the lungs.
Prevention: Teach dogs where the steps are in a swimming pool, they tend to head for a side when in difficulty but are then unable to get out.  Never leave animals unattended near water.